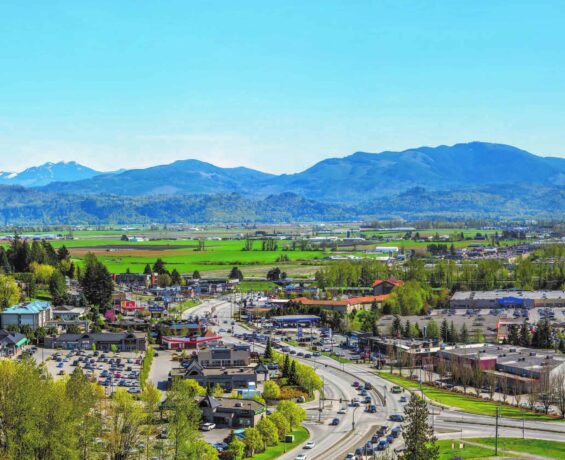 Abbotsford …overlooked by the Northern Mountains

Just over an hours’ drive East from downtown Vancouver City you’ll find yourself stumbling upon the upscale suburban utopia of Abbotsford. It is poised on the precipice of the Canada-United States border and is just the city to make you feel welcome in a tight knit community.

It also gives you some room to breathe. Being the largest city by area in all of British Columbia there is surely no shortage of space to stretch your legs. Abbotsford is made up of larger office buildings sprinkled amongst gorgeous suburban communities overlooked by the Northern Mountains. It’s almost as if the picturesque town drifted down from the mountains themselves.

Like many cities out West, this town was formed and named in regards to the Canadian Pacific Railway. There is some mild controversy about how the name of Abbotsford was decided upon, but it all revolves around the expansion of the railway and some of the important figures that were involved. The railway, being a part of the town’s inception, also lends a hand as to why Abbotsford is proud to be one of the most diverse communities in British Columbia. It trails only the Greater Toronto Area and Greater Vancouver. This in particular just speaks to the inclusive nature and community solidarity that can be found in such a wonderful city.

Much like its Western neighbours, Abbotsford also delivers on the weather front. The summers are dry with slightly higher heat than places closer to the ocean. The summer months often see average highs of 22 degrees Celsius or more and the winters skirt the edge of freezing bobbing just above and below zero degrees. Snowfall is scarce and the winters are generally regarded as fairly mild and rainy. This temperature range is just right for immersing yourself in the natural features of the city.

Starting with a local favourite, Mill Lake Park is a destination for all things outdoors. On those days that are pushing 22 degrees and higher you might fancy a dip in the outdoor swimming facilities or if the wind is a little chilly, a visit to the Abbotsford Arts Council Gallery. There’s a wealth of paths for walking and it is a great place to take in some flora and fauna. The Arts Council generously hosts free events in the park too!

They put on live music performances and seasonal gatherings like the Christmas Craft Fair which is a fantastic outing for the whole family. If you’re looking for a way to tour Abbotsford east to west, the Discovery Trail is there for you. There are marked lookout spots for anyone looking to get to know the area a little bit better.

If you wish to reach the other side of Abbotsford a little faster than walking the Discovery Trail, Abbotsford’s public transportation is great. The bus route is run by the Central Fraser Valley Transit System and generally operates between 6 am and 11 pm. Public transportation to Vancouver is also available. The Central Fraser Valley Transit System provides services to the West Coast Express which runs round trips starting in the morning and again during peak evening hours. The West Coast Express is faster than driving downtown and can have you amongst the skyscrapers in about 75 minutes!

If an airport is all you need you may be able to save yourself the trip downtown. Abbotsford actually has its own airport. They put on an annual airshow that is one of the largest in all of North America and certainly the largest in Canada. Abbotsford International Airport is serviced regularly by WestJet and is conveniently located near the United States and Canadian border so you should be able to get where you need to go in no time.

At the end of the day Abbotsford is a great place to settle if you’re a nature lover and you still need to be connected to the action. Everything is just a short ways away and the natural beauty keeps stress levels low. Check it out for yourself!